0
was successfully added to your cart.

The Daily Practice Proving Effective in the Treatment of Depression 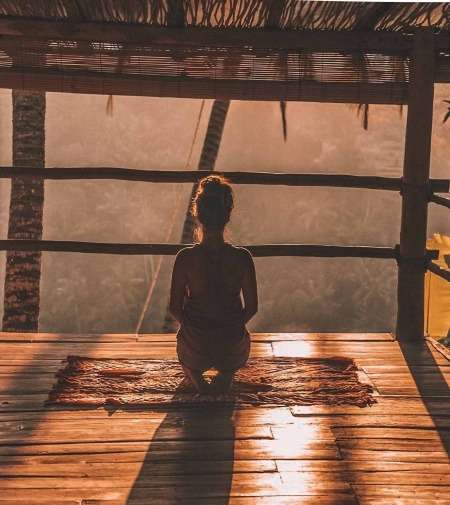 “I have no future.”
“Nothing I do is working.”
“Nothing makes me happy anymore.”
“I’m not good enough.”

I used to repeat these sentences on loop in my mind, and you might have too. It’s completely normal. Usually, these feelings are a reaction to something happening in our lives, and we start to feel better once the situation has passed. For those of us who suffer from depression, however, what begins as an ordinary bout of low mood can spiral into a full-blown depressive episode that gets worse over time.

You are not alone; according to the World Health Organization, more than 300 million people suffer from depression, and more of them are women than men. But if no one would choose to feel like this, why is it that so many of us stay stuck in depression and unhappiness?

We’ve gotten so used to being in “doing mode” rather than “being mode”.

Negative emotions are a natural part of life, so that’s not where the problem lies. It lies, instead, with how one reacts to these emotions and occurrences. Indeed, what we see in a lot of people with depression is a tendency to analyze, overanalyze, obsess, and ruminate on those negative emotions.

Alongside events like suffering a traumatic experience during childhood, unemployment, family problems, and financial issues, there are certain aspects of modern life that might explain why we’ve seen an increase in people dealing with depression. In today’s world, we are constantly running, trying to keep up with an impossible pace, simultaneously juggling as many balls as humanly possible, and always trying to achieve more. For most of us, life can feel like a sprint, and the problem with this is that it doesn’t allow you to surface for air, to stop and think, or to snap out of a slump.

We’ve gotten so used to being in “doing mode” rather than “being mode”. The former allows us to get things done, to achieve goals, and to solve problems. In this mode, we do things without being present; our daily activities are based on habits. How often do you eat your meal behind your computer or while checking your phone, not really tasting or enjoying the food?

We learn that thoughts are just thoughts. They are not facts, and they don’t necessarily have to exert power over your reality.

“Being mode”, instead, is cultivated by practicing mindfulness, which is an effective treatment for depression. It allows you to move away from an autopilot functioning and to be aware of your emotions and thoughts from moment to moment. You learn to see things as they are (not as you want them to be) and to be more grateful for what you have instead of focusing on what you don’t.

MBCT stands for Mindfulness-Based Cognitive Therapy and is a practice that teaches you to be more mindful, kinder, and more compassionate towards yourself and others. It unlocks the mind that has been imprisoned by “doing mode”. Most importantly, especially for someone suffering from depression, it teaches us to focus on the present moment rather than being lost in the past or future and to allow the negative emotions to pass in their own time without “getting stuck”, without rumination. We learn that thoughts are just thoughts. They are not facts, and they don’t necessarily have to exert power over your reality.

Mark Williams, a professor of Clinical Psychology at the University of Oxford and leader of the team that developed MBCT, explains, “Brooding is a key feature of depression. In mentally healthy people, sad thoughts pass quite quickly, but in people who suffer from depression, they don’t. MBCT tackles brooding and teaches people to be more compassionate to themselves and others.”

Scientists have been looking into the efficacy of MBCT on the treatment of depression, and the results are promising. According to Alvin Powell of The Harvard Gazette, one such scientist is Gaëlle Desbordes, an instructor in radiology at HMS and a neuroscientist at MGH’s Martinos Center for Biomedical Imaging. “In her current work, she is exploring meditation’s effects on the brains of clinically depressed patients, a group for whom studies have shown meditation to be effective. Ultimately, Desbordes [is] interested in teasing out just what in mindful meditation can work against depression,” writes Powell.